Many thanks to all of our filmmakers… and congrats to this year’s winners!

Rounding out multiple days of screenings and parties in its 15th anniversary appearance, organizers for CineKink NYC/2018 announced the recipients of awards in a range of categories during the film festival’s closing celebration on Sunday, March 18, 2018.

“It was incredibly gratifying to stride into our 15th season with such a diverse range of quality offerings,” noted Lisa Vandever, CineKink co-founder and director. “Congratulations and thanks are in order, not just to the winners tonight, but to all of the filmmakers for contributing to such a stellar line-up!” 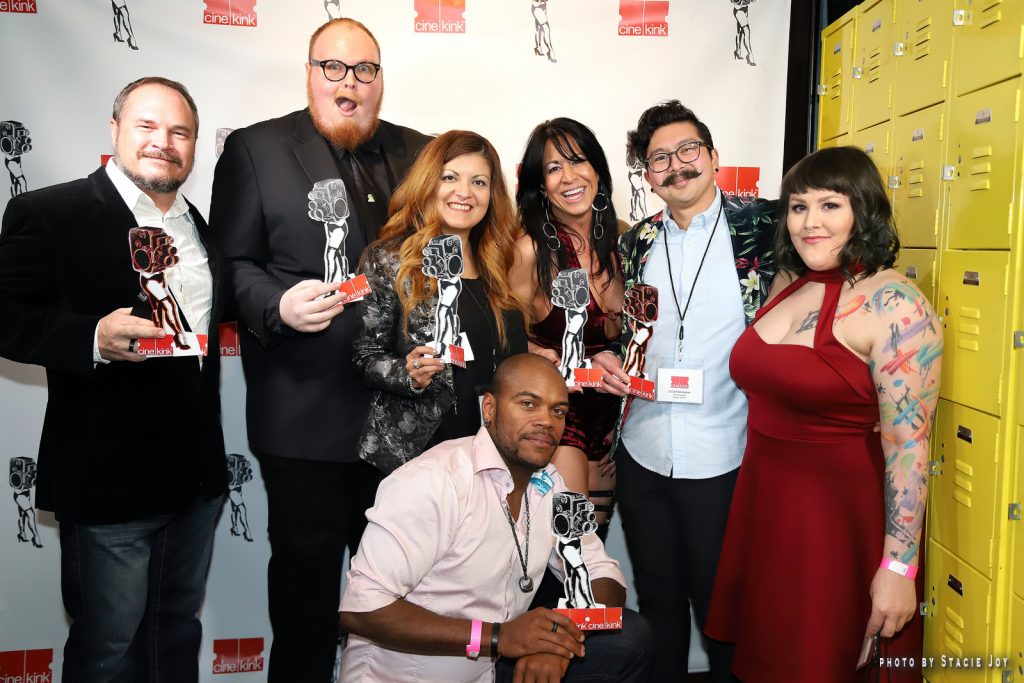 The annual CineKink “Bring It!” award, determined by audience ballot during a presentation of excerpts showcasing current adult cinema, went to “The Pickup” (Urvashi).

The CineKink Tribute, recognizing extraordinary depictions of kink and sex-positivity in mainstream film and television, was presented to the feature film “Professor Marston and the Wonder Women” (Director Angela Robinson; Annapurna Pictures).

Works eligible for consideration this year were those released or aired in the United States from January 1 until December 31, 2017.

Making its 15th anniversary run March 14-18, 2018, CineKink NYC featured a specially selected program of films and videos that celebrate and explore a wide diversity of sexuality. Billing itself as “the kinky film festival,” the event is dedicated to the recognition and encouragement of sex-positive and kink-friendly depictions in film and television. With offerings drawn from both Hollywood and beyond, works presented at CineKink NYC ranged from documentary to drama, comedy to experimental, mildly spicy to quite explicit – and everything in between.

Selections from CineKink NYC will be featured in a traveling version of the festival, slated to appear in various cities throughout the coming year.

See below for detailed descriptions of the works.

CineKink Choice awards, which go to feature-length works in competition during the festival, were determined by audience balloting at the close of each eligible work’s screening. The 2018 award winners are:

CineKink Choice Award for Best Narrative Feature:
Fantasy
In an attempt to improve their marriage, a couple books an appointment with renowned sex therapist Dr. Harvey Buñuel. Over the course of five sessions he has them participate in increasingly surreal exercises designed to help with their intimacy problems. What will be the ultimate solution? Directed by Dashiell Demeter, 2017, USA, 63 minutes. Stars Cerris Morgan-Moyer, Andy Gates and Pancho Moler.

CineKink Choice Award for Best Documentary Feature:
V-Card: The Film
Dillon, a 23-year-old virgin (not for lack of trying), sets out on a comedic, documentary journey to discover what virginity means in our society. Along the way he talks to sex therapists, porn stars and everyday people about what they think virginity means in our modern times. Why is sex so important, and how can he make sense of why he has been so unlucky in lust? Is there really only a first time for everything or is there more then one cherry to be popped? Dillon is more than willing to finally find out. Directed by Jamal Green, 2017, USA, 81 minutes. Interviews include Asa Akira, Joanna Angel, Nina Hartley, Krystyna Hutchison, Sara Jay, Belle Knox, Lexi Belle, Ryan Driller, Evan Stone and more.

CINEKINK BEST – JURY AWARD FOR BEST SHORTS
CineKink Best awards, which go to short works in competition during the festival, were determined by jury ranking, with additional deliberation by the festival director. The 2018 award winners are:

CineKink Best Dramatic Short:
Queen Kong
A smartly-dressed man and woman are trying to have sex behind a tree. In the distance is the music of a party. She’s beautiful and he’s too drunk and the persistent ringing of his phone breaks the mood. The interlude goes unconsummated, until Queen Kong steps in. Directed by Monica Strambini, 2016, Italy, 20 minutes. Stars Valentina Nappi, Luca Lionello and Janina Rudenska.

Laurels
French director Pauline Sala is dismayed that another filmmaker will be sharing her hotel room in order to save a fledgling film festival some money. This strange woman has a secret that Pauline will soon learn, however, and surely won’t ever forget. (Directed by David Brundige, 2017, USA, 7 minutes. Stars Vahina Giocante and Rhian Rees.)

Morning After
After a long time abroad, a young man returns home and reunites with friends. A sensual game amongst them forces him to confront deep conflicts that lead to a powerful awakening. Directed by Patricia Chica, 2017, Canada, 15 minutes. Stars Thomas Vallières, Kristian Hodko, Zoé De Grand Maison, Joey Scarpellino and Jordana Lajoie.

Writing in Bed
A mean case of writer’s block and noisy roommates make it very hard for Parker to get any work done. But when a rowdy and tipsy Aaron stumbles into her room late at night, she finds herself drawn to an inspiring distraction. Directed by Shine Louise Houston, 2017, USA, 19 minutes. Stars Ingrid Mouth and Tommy Pistol.

“BRING IT!” – ADULT INDUSTRY SHOWCASE AWARD
The CineKink “Bring It!” award is determined by audience ballot during a presentation of short works and excerpts showcasing adult cinema.

CINEKINK TRIBUTE – RECOGNITION OF SEX-POSITIVITY IN MAINSTREAM FILM/TV
Annual festival award for Extraordinary Depiction of Kink and Sex-Positivity in Mainstream Film/Television. Works eligible for consideration this year were those released or aired in the United States from January 1 through December 31, 2017.