Rounding out multiple days of screenings and parties in its thirteenth annual appearance, organizers for CineKink NYC/2016 announced the recipients of awards in a range of categories during the film festival’s closing celebrations held on Sunday, March 6, 2016

“The overall quality of the films was consistently high this year,” noted Lisa Vandever, CineKink co-founder and director, as she presented the awards. “Congratulations not just to the winners tonight, but to all of the works for being part of such a stellar line-up!” 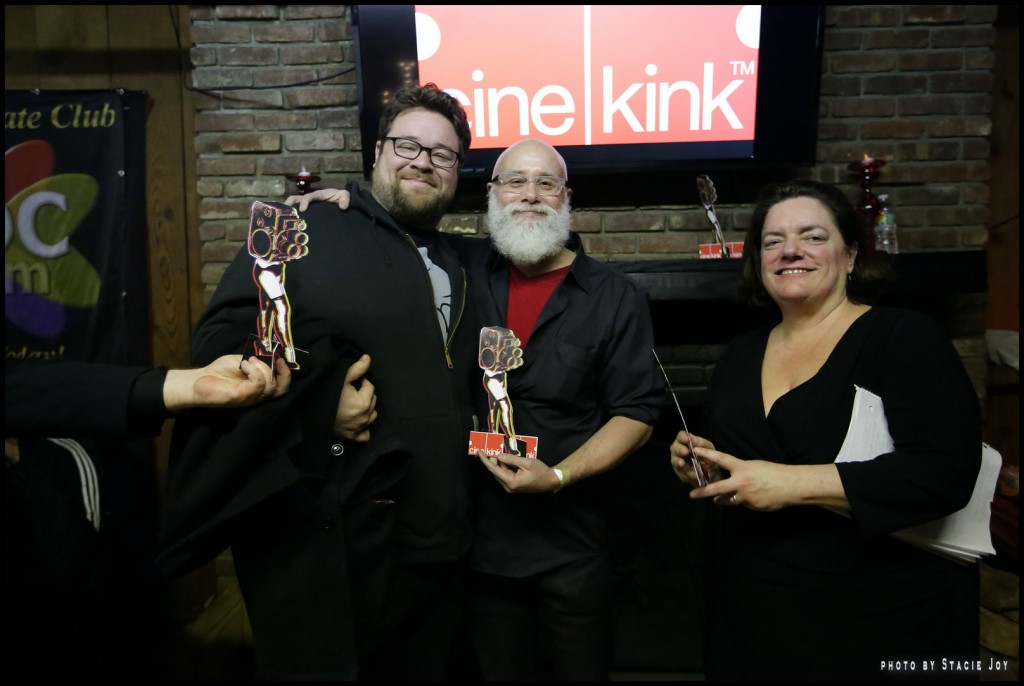 In the shorts competition, juried festival awards went to “Feminist Porn Filmmakers” (Lora Hristova) for Best Documentary Short, “An Appointment with My Master” (Erika Lust) for Best Narrative Short, “Pepper” (Patrick Aubert) for Best Dramatic Short, “Dad in Mum” (Fabrice Bracq) for Best Comedy Short, “Locked” (René de Sans and Mamana) for Best Experimental Short, and “RITES” (Bunnyz) for Best Musical Short. Honorable Best Mention awards were presented to “Everybody Does It” (Meg Brotherton), “I Am a Tourist I Would Like to See Him Naked” (Margie Schnibbe aka Vena Virago) and “Wild Lovers” (Isabel Dresler). A special CineKink Festival Award for Outstanding Creative Vision was announced for “Clitorissima” (Giovanna Carla Gia Balestra AKA Vulvah van Klitt, with animation by Sarah Koppel)

The CineKink Tribute, recognizing extraordinary depictions of kink and sex-positivity in mainstream film and television, was presented to the series “Broad City” (Ilana Glazer and Abbi Jacobson/Comedy Central), for its “affirmation that women have raging libidos equivalent to that of any guy.” Honorable mentions for the CineKink Tribute went to the television series “Inside Amy Schumer” (Amy Schumer and Andy Powell/Comedy Central) and “Crazy Ex-Girlfriend” (Rachel Bloom and Aline Brosh McKenna/The CW), and to the feature film “Magic Mike XXL” (Reid Carolin/Warner Bros. Pictures). Works eligible for consideration this year were those released or aired in the United States from January 1 until December 31, 2015.

Making its 13th annual run March 1-6, 2016, CineKink NYC featured a specially selected program of films and videos that celebrate and explore a wide diversity of sexuality. Billing itself as “the kinky film festival,” the event is dedicated to the recognition and encouragement of sex-positive and kink-friendly depictions in film and television. With offerings drawn from both Hollywood and beyond, works presented at CineKink NYC ranged from documentary to drama, comedy to experimental, mildly spicy to quite explicit – and everything in between.

Selections from CineKink NYC will be featured in a traveling version of the festival, slated to appear in various cities throughout the coming year.